As promised, I have a real treat for you as I have been dying to share the news about our latest shoot we did at the weekend which brought back the wonderful Leia-Ann Woods and I finally managed to get the beautiful Irelynn Logeen and once again this combination worked on so many levels. Some of the stuff we filmed and photographed was (well, in my humble opinion) very VERY good and I can’t wait to see the results once the edits start coming to me! I have got a nice little “Behind the scenes” free gallery which helps explain some of what we got up to but there was so much more.

The location was excellent, the company great (thanks girls for making it a fun shoot!!!) and, thanks to my partners in crime for getting me absolutely hammered Saturday night after the girls went their way… “Hey, Kids! Don’t do copious amounts of Stella Artois…” my recovery was ridiculously slow with a hangover from hell on Sunday! All this after being insulted as “Cakeboy” by Leia (but more on that later) Click the main image below and it will take you to a free gallery, most images are raw and I’ve reduced them in size but you’ll get the idea of what’s going on! 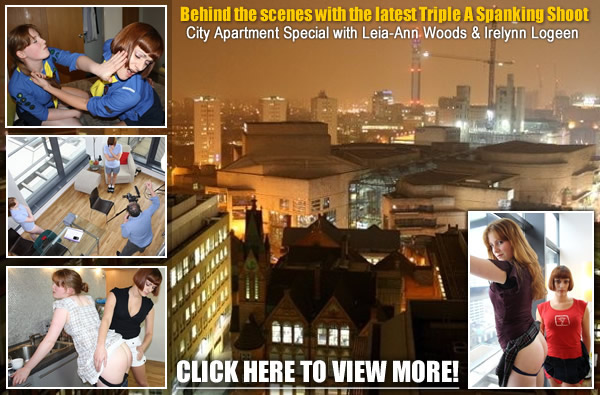 OK, as you’ll see, my little purchases on eBay were a success, I got myself some genuine vintage Guide uniforms and we used this for some image sets and a great film that had the girls trying to sneak out dressed up in this cute gear to a fancy dress party… needless to say, I disapproved of the way they dressed so thrashed them both! I also upped the intensity of the spankings in many films and you’ll see some great OTK spankings and Leia got to “top” a few times too so F/F lovers are catered for and one film was particularly hot as Irelynn’s soft rump was turning a toasty shade of red to match her hair! I also managed to break my favorite hairbrush in a pyjama film with Irelynn, so she got to keep it as a trophy! There were the usual schoolgirl scenes – and you can never have enough excuses to spank a girl looking incredibly sexy in various uniforms and outfits! We decided to try out some interesting cam angles too but we took advantage of the location’s great views to do some spankings and punishments against the windows (after it stopped raining… sigh) for all the world to see, I don’t know if anyone did, but they would have seen the moon rising early!!!

One quick short sharp shock type scenario I filmed with Leia came from one of her tweets as she made a derogatory remark about me helping myself to some cake at the restaurant that Leia, Irelynn and myself were at the night before. The place was starting to close (so I just thought I’d get my share, that’s all!) see the cheeky tweet below… “cakeboy” indeed! 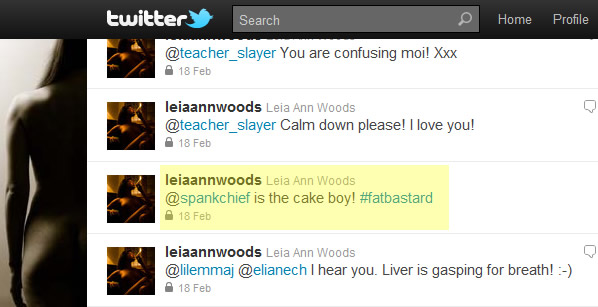 Ok, so you get the idea, there are so many more films including a great bathroom finale that has a soapy sud spanking of both girls, so lots of goodness to come!!!

& if you check out the very latest update today, as promised, it’s the film of Kami in her Flamenco dress, I have got you some preview images taken directly from the film and I also have important news about all future films as we are upping the quality of the playback as an additional option for those that want to watch HD films in larger, crisper 1280 x 720 size – it will be in MP4 format and there are now dozens of media players that can easily view this, it beats our Wmv versions but that will also be available in clip and full file format as standard and won;t change as we fully understand it’s still the most popular playback format from our previous poll but to increase the size of the films in Wmv isn’t as good as MP4 so we’re going to try that as an added option and will add both files when the full updates are due (so we won’t cheat you with “remasters” or other cheap nonsense!) However, to change it into another format , like say, Real Media would also mean resolution loss so that’s why we stuck with MP4 – we hope when you see this full file and all future movie files – that you will be suitably impressed!

Some Wmv Images from the film “Flamenco failure”

You can see a FREE PREVIEW CLIP from this latest movie HERE
(Full description of the movie is on the page too!)

Remember that we update the site at least 3 times a week, we sometime add bonuses (I did today) and updated the full video image set and half the film already with some great spanking scenes, we will always aim to get at least 1 new film out every week without fail! I’m hoping to get out a film with Irelynn next once the edit is complete and it’s a good OTK spanking film for those that are into that sort of thing (yes, I love OTK spankings!)

Take advantage of our low prices and even better 3 and 6 month memberships which just make sennse when you work it out! Enjoy! We enjoyed making these films, I hope this shows!