As promised, I will let you know what went on behind the scenes of certain movies we produced at AAAspanking and this one I wanted to let you know about as it was one of my favorites as it was quite funny and Jasmine proved what a great little actress she was by going along with my outrageous ad libbing. 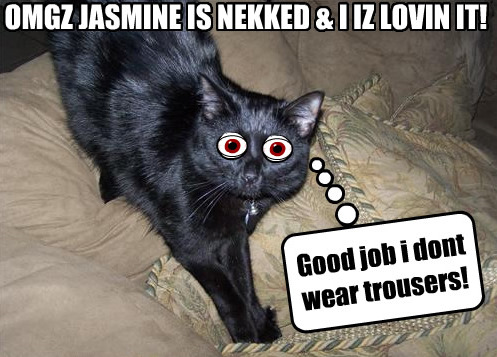 TROUSER AROUSAL ALERT FOR THIS FILM IS SET AT “MAXIMUM”

It was Jasmine’s last film of the day and her bottom was quite sore already, so it quickly reddened up, I agreed not to thrash the hell out of her, and to be honest I was knackered anyway (those who attend film shoots will understand) &  there was no need to as I decided to play a grumpy hypocrite who turns down a sexual favor any red blooded male would jump at from stunning Jasmine (am I mad???) preferring instead to spank and caress/grope her bared red bottom as way of punishment instead… to which I say repeatedly that it was “nothing sexual” and just erotic – a bit like my claims of when I’d furtively buy Kane magazine years ago and tell my missus that I wasn’t “getting off” on the mags when she saw them stashed away, oh good god, no! “they were just forms of eroticism I was investigating” and so on… LOL!

We somehow made this through in one take as there was much tittering and giggling in the background as the banter between Jasmine and myself got more lewd and ridiculous… If you see on the tour pages (where there is a different free promo clip) you can read the story of the film there in full, but in brief: Jasmine offers herself sexually to her boss, Mr Osborne to make up for her costly mistake… however he shuns her advances, in fact he is “disgusted” and instead seizes a chance to spank and punish the girl instead – but she considers his over zealous caressing and groping of her firm toned buttocks and gawping at her when she is ordered to strip naked somewhat “Sexual” He retorts again and again that this is just “Erotic” (indeed it may be, Mr Osborne)… and of course this film does indeed have highly erotic scenes of Jasmine bent over getting her sore bum whacked with a hairbrush and continually spanked and carressed as Mr Osborne secretly leers at her behind her back even plays up to the cameras!!! Involving, you… the viewer to check out more of this wanton temptress! We had a lot of fun making this film and hope you enjoy it too! For those who are not members, please do check out some images I have provided from the movie below, I have also included my special free clip which shows the moment I talk to the camera as Jasmine “mocks” us mere mortal spankos as I seem to fail to persuade her that I am not sexually turned on… ahem! Ha! I blame her nakededness for arousing me in the first place – PUNISH HER! “She be a temptress!”

You can see why Jasmine is one of the most popular models to work with and view as a member with the exclusive clip (below) and I can assure you there are other great films already there and many more to come! Jasmine loves her fetish work (even though she is quite well known now as one of the UK’s hottest up and coming adult actresses, this kink of hers is genuine and we think it shows!) She admitted to me between our films that she actually tried to introduce a little spanking into her hard core films too, when the – um – actors were banging her and I admit that I have seen some of her work and there are some slaps and whacks as she is being ravaged by some stud! (phew!) Anyway, I am again digressing, I am 100% positive that we will be employing the services of Jasmine again in the very near future!

Reminder: We are filming in less than 2 weeks so I would like to say “thanks” to those that have written in with suggestions already and the location images I hope, are there to help you come up with scenarios! CLICK HERE for the reminder post if you’ve missed it. (I’ll be back later with my round up of other hot updates from around t’Globe and I promise some of these are “Trouser-rousal-riffic!”)