It’s been a while since I did a proper review of a long play movie and this one starring Amy Hunter and Leia Ann Woods as 2 bratty sisters is a peach of a film from spanking specialists NORTHERN SPANKING! Why? Well, I loved the authentic settings, we even get an opening scene of both girls playing up in the car as Mum drives them home in difficult driving conditions… now I’m sure many of you will be aware of the distractions of annoying brats in the rear seats…play fighting, mucking about, saying they want to go “for a wee” or asking that infernal question “Are we there yet?” See the build up below and you’ll understand why these girls will soon be ending up pants down, crying and humiliated when they get home!!! 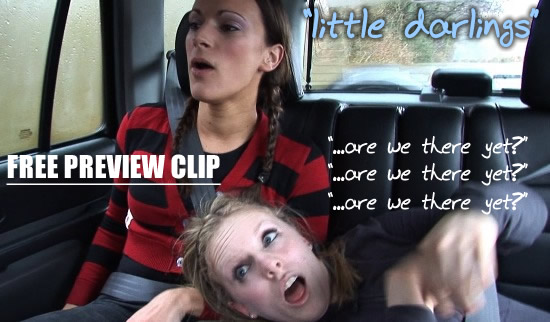 Below are some images and of course, you may have realised by now, this movie is one of their special HD spanking versions in MP4 format – all these movie formats are easily played on VIDEOLAN, the best multi platform media player – if you don’t have this, you can download it free HERE. Anyway, the images below show you that both girls are spanked and slippered across their panties, then with them removed as each girl at first is forced to watch the other. Amy takes a spanking whilst Leia pokes her tongue out, hmm, they aren’t taking this seriously, are they?….it’s around this point that both girls are given the slipper as mum is convinced these brats are NOT learning their lesson! 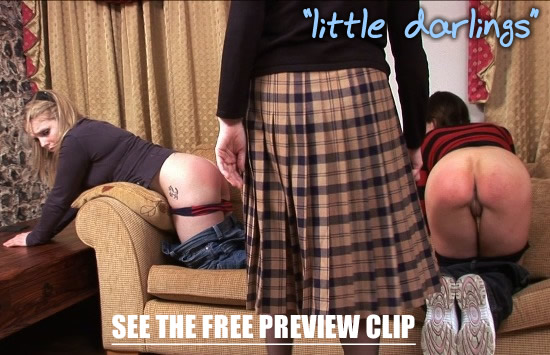 Now the twist happens to these “Little darlings” during their nasty slippering punishment as both bottoms are beginning to turn a shameful red, and both girls are snivelling and starting to feel sorry, so what happens? Stephen Lewis returns to find his “little darlings” being thrashed and having spoilt his girls (rather foolishly) the slippering stops and the arguments about the car journey, the bickering and these brats behaviour comes out but Stephen isn’t listening and ushers the girls away after even giving them pocket money!!! Check out the moment that he returns to find this terrible scene in front of his eyes! 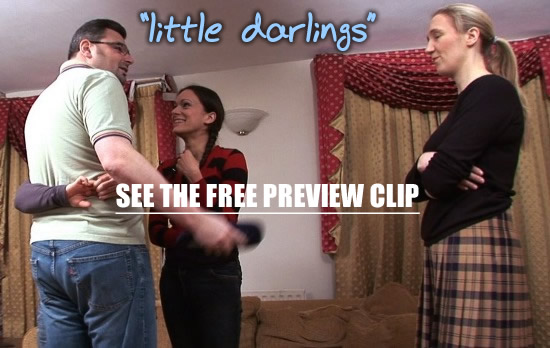 Don’t you hate it when you can see precious little darlings like this wrap their fingers round their adoring dads? Mother here thinks so, she knows the true extent of their nature but he’s blind to it, and now as the girls are away he punishes his wife in the same room that only 5 minutes earlier was filled with the moans and sobbing of Amy and Leia-Ann! What follows is a great domestic discipline scene of a hard spanking followed by a quite severe caning – and I have to say, Andi Switch – who plays the wife is looking MILFtastic – who would have thought she was wearing such erotic lingerie underneath that boring plaid skirt? yet another surprise inthis great movie!!! The end of this film is a great finale as she is caned, stripped down to just her sexy underwear, and I’m always a sucker for women with great legs in dark stockings anyway…check out the caning scene below, you’ll get an idea of what happens at the end! (the full caning scene is fantastic btw!) 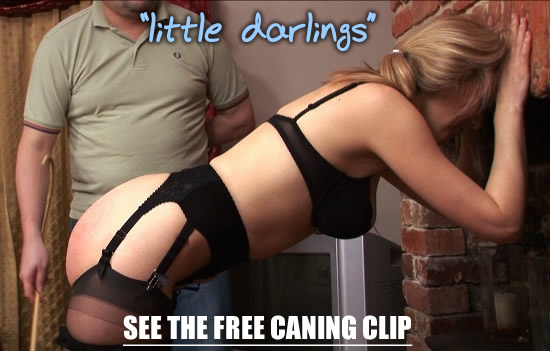 This long play HD Spanking movie (and there’s so much more, I have only scratched the surface of what this one film offers) is only available at NORTHERN SPANKING – there are other HD movies which are being uploaded which adds to their vast movie collection, and of course, there are now over 60 of their infamous SSS (Short Sharp Shock) films which caters to those wanting to see punishments quickly without a big build up of storylines etc…