This is a unique Girl/Girl punishment film – in that it features 2 massive spanking stars now sadly retired from “The Scene” but will never be forgotten… what’s more, when you see who the Mistress is, you just know that this spanking and punishment film is going to be well worth watching! OK, enough of the teasing, this film, called “Pillow Fight” stars Rosaleen Young and Niki Flynn, with Shanelle (who takes no nonsense from either girl) when it’s time for their punishment! 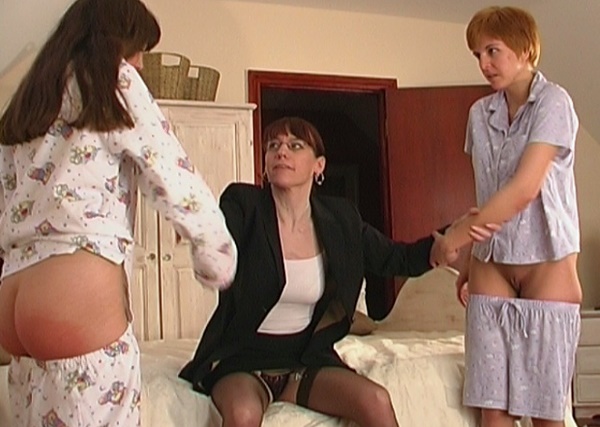 Rosaleen and Niki got into a pillowfight that was out of control as both girls screeched and fought until Miss Van Dyer arrived in their Dorm Room wondering what all the noise was about when they should have been getting ready for bedtime! The girls knew the rules, even if it was light outside, it was bed by 8pm! When the girls continued to brat amongst themselves they only got themselves into further trouble as each girl was taken over the Dorm Mistress’ knee for a short sharp shock spanking but this still wasn’t enough until both girls were placed side by side and given the slipper which soon brought the sound of sniffing and sobbing instead of the bitchy comments and continued bratty behavior! This bedroom punishment movie is now finally available for those that just want to download the odd movie and this latest addition comes complete with a full set of video images as well (see some sample below)

Currently , there’s a FULL 75+ movie listing of all pay per download films HERE including most with free preview clips and full storylines and images so you can see what the films are about to help you decide, it’s also a great way to get lost in a maze of spanking previews and well worth a peek if you have never seen this site offering these sort of cheap options before. The movies are not streamed, so once you download them, you can keep them and play them back until your laptop explodes or you do, whichever comes first!