Oh wow….how good is this? I have long admired Pandora Blake’s work and of course have had nothing but praise for Catherine Corbet in the past, so when this movie was chosen to celebrate the 50th film and movie pack addition earlier today I was suitably impressed! Now I read Pandora’s blog on a regular basis and am aware that I guess she isn’t that keen on acting out, say, a religious themed spanking fantasty but this was a “delightfully crackers” movie that I don’t think it really mattered and I think this was also one of their first movies that they had starred in together. I’m going back now as this was filmed around early 2007…but in this special format it holds up well, and it’s a rare movie that not many people will be aware of. Hopefully, this will do it the justice that it so deserves as there’s some great chemistry between Catherine & Pandora that you MUST see as well as their “Pastor” Tom Cameron! Please, enough of my waffle, just check out the Movie Preview Page by clicking on the image below and decide for yourself. For those that only pick and choose the odd spanking movie, this 24 minute film should be one of those you might want to consider if you’ve not seen it before! The movie contains scenes of bi curious F?/ making out, F/F spankings… and withering put downs and punishment by their Pastor together and in front of each other: Contains scenes of hard strapping and caning of both girls! What more is there to say? HIGHLY Recommended! The film comes complete with a video stills set as standard. 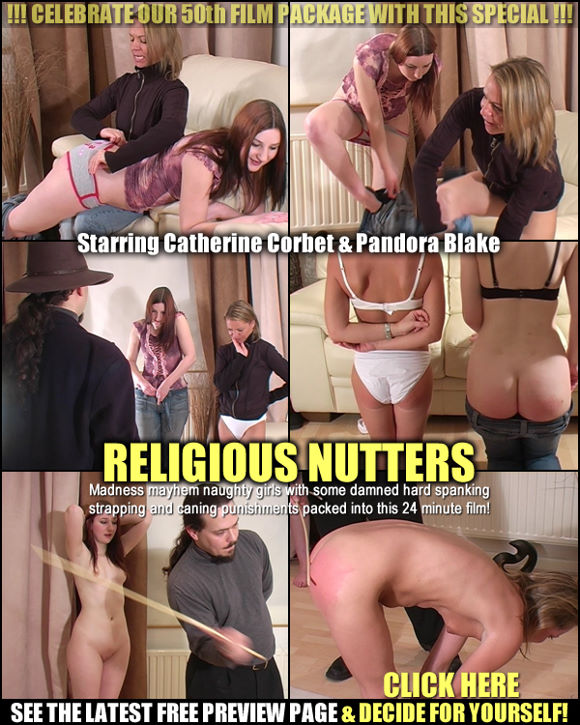