Schoolgirl spanking movies… just about every genre of this has been done, what is there not to do? Interestingly, the night before my last shoot when I was accused by Leia of stuffing my face full of cake and such… (thanks Leia) we got onto the subject of schoolgirl movies, how it had all been filmed…. how we jokingly refer to “generic schoolgirl movie, wrong uniform part 377 and so on, but of course schoolgirl spanking movies are very popular and for a good reason! Anyway… the crew from Northern Spanking had thought about this too and thought “hang on… schoolgirl spanking movies… they’ve not been done in Outer space! Let’s do that!” Well, now it is finally out and it’s a rather hilarious spoof of all those dodgy Sci Fi movies we watched as kids! 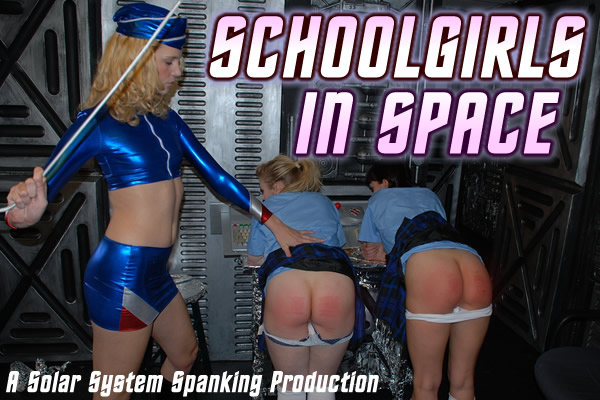 I have to say, I wouldn’t want to travel on that “spaceship” – it looks scary, like the set of Alien! In space, no one can hear you scream or being spanked!

So far, I have some promotional images and they feature Amelia Jane Rutherford as the aloof and fed up Spaceship Stewardess (or attendant as one of my air hostessing girlie friends told me like like to be called, the other day!) Leia and Amy, 2 girls who feature a lot, of course, play the bratty and out of control schoolgirls on this inaugural passenger flight to The Moon. Check some images below, the first parts of this movie are out now… but these promo images must be from a later scene as the girls were spanked by the Captain after they messed around with the controls.

Please be aware that the “set” of the spaceship ranks alongside the fascinating and shakey spaceships of the Dr Who series of the 1970’s alongside Blake’s 7… the tin foil hats and hilarious tin foil console make this look like an old “Flash Gordon” type black and white series from the 1930’s but it’s a deliberately viewable film as you see Amelia ham it up (in that tight uniform!) with her disdainful “Air Hostess” chat over the intercom, being aloof with the naughty girls… and what til you see the “captain” in his shiny silver shirt! Oh, I forgot the spanking… lol… of course the girls get into trouble and are given a spanking by him in the cockpit. I’m hoping that Amelia gets to chastise these girls as the promo pics here demonstrate! I’ll let you know!!! OK, just one more piccie of Amelia and the girls! 🙂 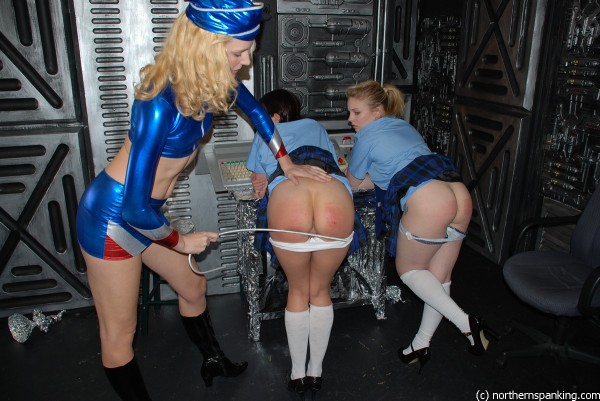 1 thought on “Schoolgirls… In… Spaaaace!”