What a way to retain the Ashes! Apologies to my American chums and European readers who don’t know what the hell I’m on about but as a red blooded Englishman it is my duty to gloat, no SHOUT OUT England’s magnificent win in Melbourne earlier today to retain our cherished Ashes! See the report on the image below: 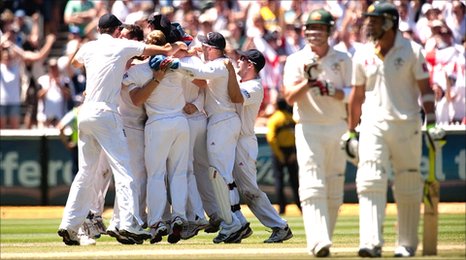 Sadly I don’t have any new or recently updated images of Australian girls getting spanked so the title of this post is pretty meaningless, I just wanted to say “Spanking the Aussies” one more time! (There goes my remaining 15 readers from “Down Under”)…

& onto the bare bottom spankings and have I got some cracking images and clips for you to peruse over today! First from the ever improving FirmHandSpanking is one of my favorite new girls, the perky Goldie Rosemont who I’d love to have misbehave so I could give her a proper thrashing in private… when Firm Hand do their bathroom scenes, you know there will be plenty of embarrassing nudity and hard punishments a plenty and Goldie gets dragged to the bathroom along the floor by Reform School’s Eric Strickman and then she is mouth soaped (which she hates) then given the hard wooden bath brush across her bared and soaped up quivering sore red cheeks! Why? Because she was overheard using filthy unladylike language on the phone! See the long play clip I had made yesterday at TEEN SPANKING TUBE or click image below directly for the instant playback!

Images below are some HQ photos taken from the film!

This is the description of the movie given directly by FirmHandSpanking themselves, and I can’t argue with their proud write up of this hard sexy spanking film!

“Rarely has one girl’s bottom bounced so magnificently under a bath-brush spanking! See Goldie Rosemont’s bare cheeks quiver as they’re wetted down for 61 smacks from Reform School principal Eric Strickman. Using the ‘F’ word earns her a mouth-soaping, then a tough spanking with an unyielding wooden brush. “Those shouts were real,” said Goldie!”

I’ll be back with another update later, I got to take the grandkids down to the local lake to feed the birdies! :))) Ah, the joys of Holidays, eh? (looking forward to it, actually)