I wanted to be upbeat on here rather than moan about my useless piece of shit football team getting relegated yet again to the lowest league today (well done) so I thought “why not view some of the hottest girl on girl films that would have me literally aching and forgetful about my team’s inept showing” – I need look no further than SpankSinn.com – why? have you seen what Sinn can get up to with her girls? She is one of the most seductive and predatory spanking females out there, knows what she wants, usually gets it and has a lot of sexual fun and a trail of sore red bums on the way! Start downloading and watching Sinn’s movies and you’ll forget what bloody day it is, lol! 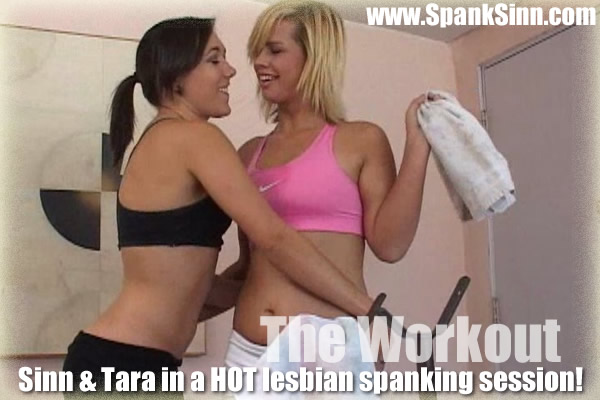 So this classic was taken from around a year ago but you’ll get the gist of it as Sinn had been watching super sexy Tanya Foxx’s butt during their 3 mile run so when both girls are back, Sinn decides they should have more of a “workout”. The images below taken from the movie which in total runs to around 50 minutes feature hot girl on girl caressing, making out, fondling, spanking, butt grabbing… um, more making out and pussy play, oh… and use of other spanking implements… er, and more bottom rubbing, pussy play and making out – now THAT is what I call a workout! *phew*